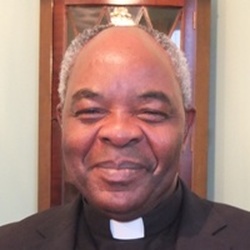 He studied Theology and Religious Studies at the University of Bristol and Moral Theology at the Accademia Alfonsiana in Rome.

For 15 years he was a parish priest in his home diocese of Mahenge, Tanzania. Following that he became Treasurer General of the diocese for three and a half years and then Director of Formation for four years.

Prior to his appointment at St. Bartholomew's Father Deo had worked in the parish of St. John the Evangelist, Gravesend from 2008. He also studied Ecumenism and Scripture in Jerusalem for one year. He was appointed Curate at St. Bartholomew's in 2011, and Parochial Administrator in 2013. 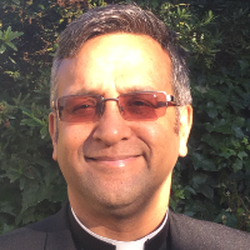 Deacon Ged Perkins was born in West London but he has lived in South London for the majority of his life. Initially he lived in Brixton Hill where he attended St. Bernadette’s Infant School and St Bede’s Junior School. He then went to Bishop Thomas Grant RC Secondary School in Streatham. It was whilst Ged was at BTG that his parents decided to move to Norbury in 1975.

It was during this period that Ged joined the various activities that the Parish offered – he was a part of the 32nd Scout group and the St Bart’s football team where he played football under the guidance of the ‘legendary football coach’ Eddie Sanders.

After school Ged went into a career within local government working on frontline services at two London Boroughs. He still works in local government but with a national organisation which works with all local authorities in England & Wales helping them to manage the delivery of their services within an ever-changing environment.

Ged is happily married to Kathy. They have been blessed with two sons Nathan & Theo (their names mean ‘Gift of God’ in Hebrew and Greek) both of whom went to St James the Great and St Joseph’s College. It is through their influence that Ged became a football coach as well as a foundation governor at SJG with the hope of giving all children at the school the opportunities to excel.

Ged was asked to be an Extraordinary Minister of Holy Communion by Fr Richard Whinder. He was then asked to become a catechist by
​Fr Tom Cooper (prompted by Maria Lopeman). All of these factors alongside Deacon Paul’s Vocation Homily were strong influences in motivating him to make an enquiry about the permanent diaconate. A wonderful journey which culminated in Ged being ordained a deacon on 17 June 2016.